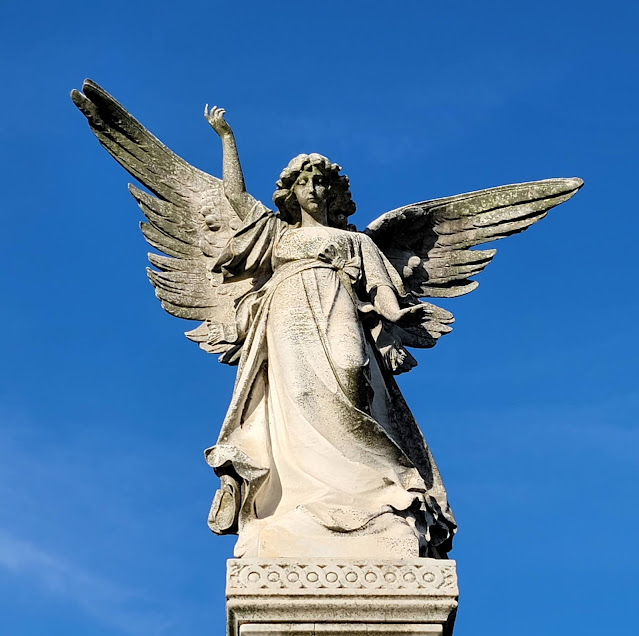 The New Cathedral Cemetery is a Roman Catholic cemetery, with 125 acres, located on the westside of Baltimore. 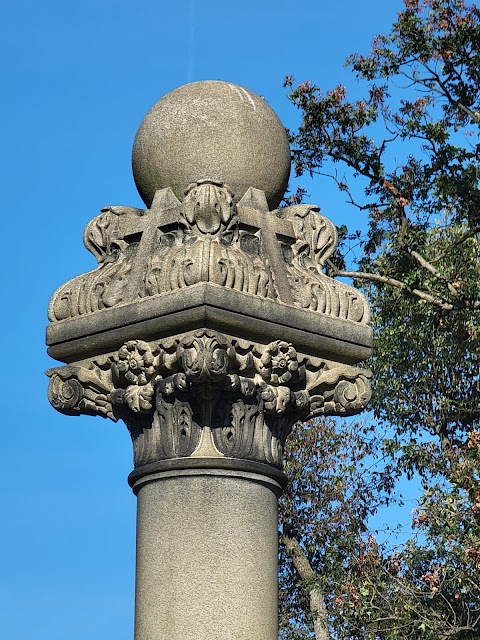 Established in 1871 in the Victorian rural garden cemetery style, it is the final resting place of 110,000 people, including numerous individuals who played important roles in Maryland history. 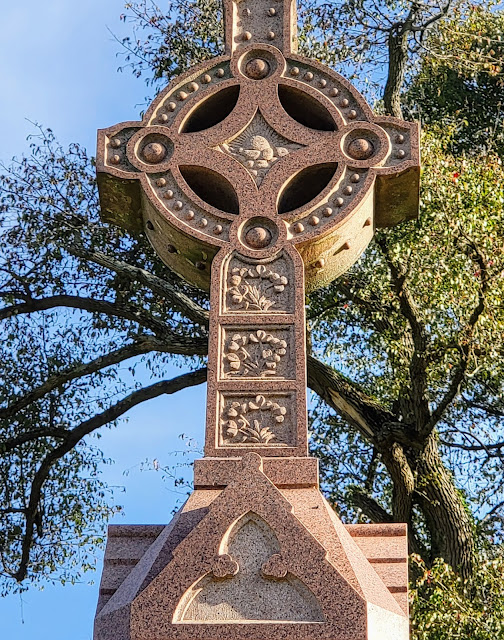 As you explore this cemetery, you can’t help but notice the strong influence of the Roman Catholic church, with numerous crosses, mournful angels, and other religious icons, and that makes sense, as this is the only cemetery owned by the Archdiocese of Baltimore. 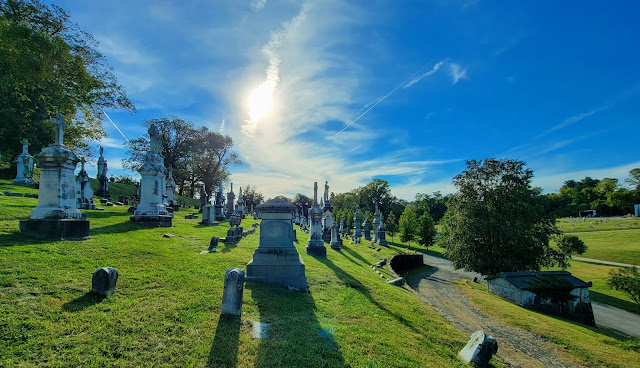 In particular, we noticed a lot of palm frond iconography — so much so, that the palm fronds stood out. I don’t believe we’ve noticed palm fronds in other cemeteries, or at least, not nearly so many. 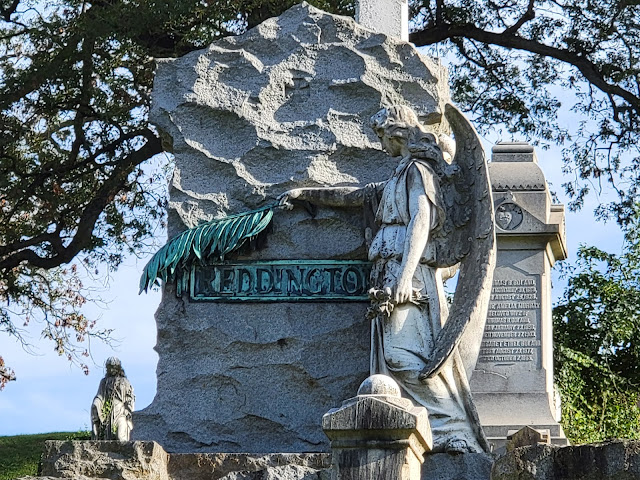 But since this is a Catholic cemetery, that makes sense. Palm fronds are a Christian symbol of death and eternal peace. They reference Palm Sunday and symbolize Christ’s victory over death. Palm fronds are often incorporated into other symbols on a grave marker, such as a wreath or a cross. 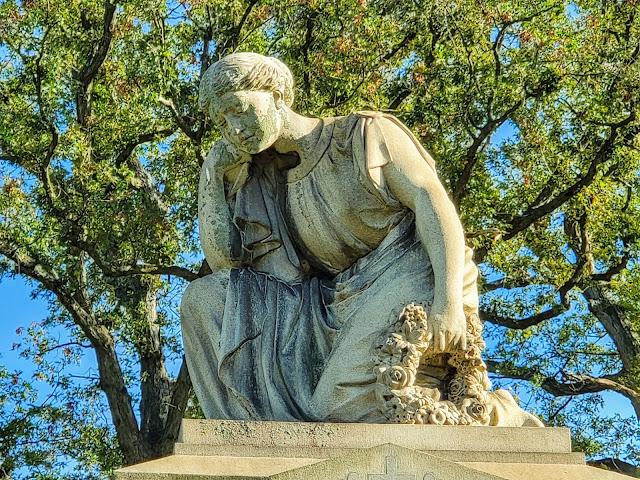 The cemetery also contains the remains of people who were previously buried in two older Catholic cemeteries: St. Patrick’s Kirkyard and Cathedral Cemetery. 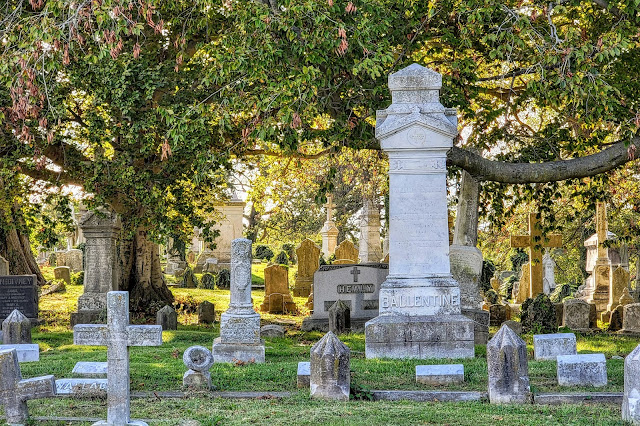 You’ll also notice a lot of shamrocks and Celtic crosses accompanying very Irish-sounding names, but the cemetery helps preserve the memories of folks from other heritages and ethnicities, including Italian, French, Black and African American, German and English. 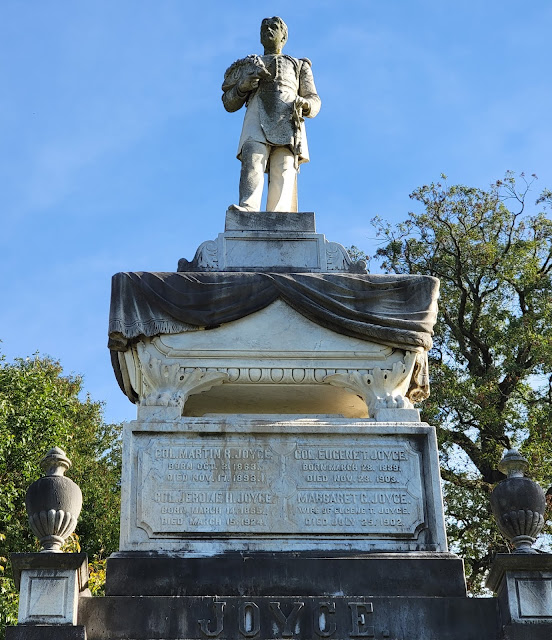 For baseball fans, it is known as the only place in the country where four baseball Hall of Fame members rest for eternity. Three are of Baltimore Orioles’ fame: Ned Hanlon, Joe Kelley and Wilbert Robinson; the fourth is John J. McGraw who managed the Orioles for three seasons before moving over to the New York Giants. 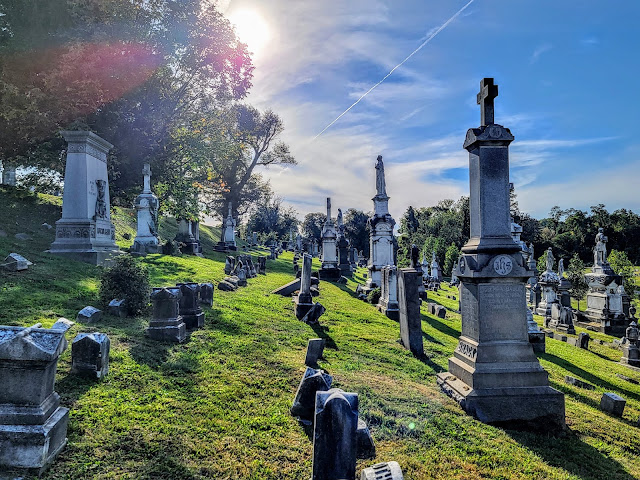 Other notables in the cemetery include John Surratt, one of the Lincoln assassination conspirators who heartlessly left his mother to take the full rap while he fled to Canada; she was hanged with several other conspirators in July 1865 (Mary Surratt was buried in the Mount Olivet Cemetery in Washington DC). 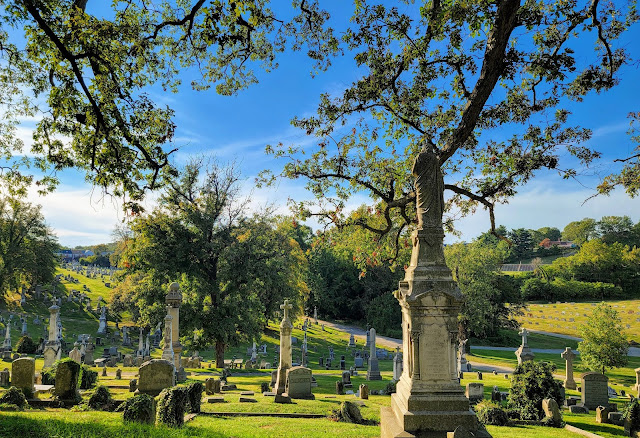 On a more positive note, Ephraim Francis Baldwin is also buried there. Although his name isn’t as well known as Surratt’s, it’s likely you’ve seen at least one of the buildings he designed, among which are the Baltimore & Ohio Railroad’s roundhouse in the Mount Clare neighborhood of Baltimore and the incredibly long B&O Railroad’s warehouse, now incorporated into Camden Yards Baseball Stadium. 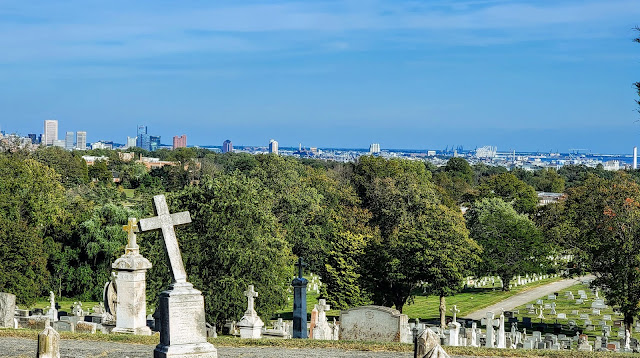 For ghost lovers and ghost hunters alike, the only thrill you’re likely to experience at this tranquil cemetery is from the view of the city, looking over toward the Inner Harbor. In fact, it’s worth coming to this cemetery, and climbing up its central hill, just to enjoy that view. If you want to check out a haunted Baltimore cemetery, then head toward the Westminster Burying Ground! 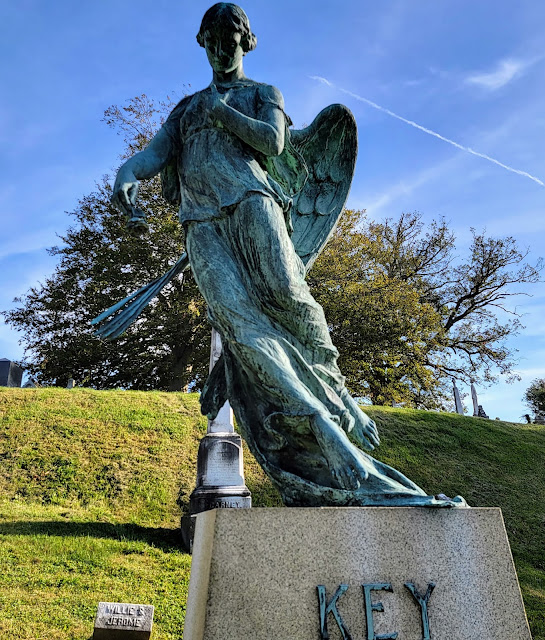 Tombstone tourists will appreciate the beautiful headstones, such as the Key (as in, Frances Scott Key) family plot, although the author of the National Anthem himself is buried in Frederick’s Mount Olivet Cemetery). The angel on top looks as if she’s about to take off in flight, toward eternity. 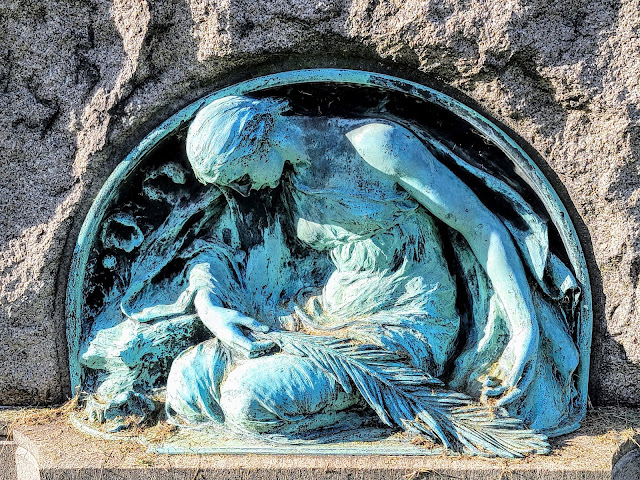 I also was struck by Florence and Adolph Meyers’ headstone — the copper or brass sculpture on the front was beautiful. 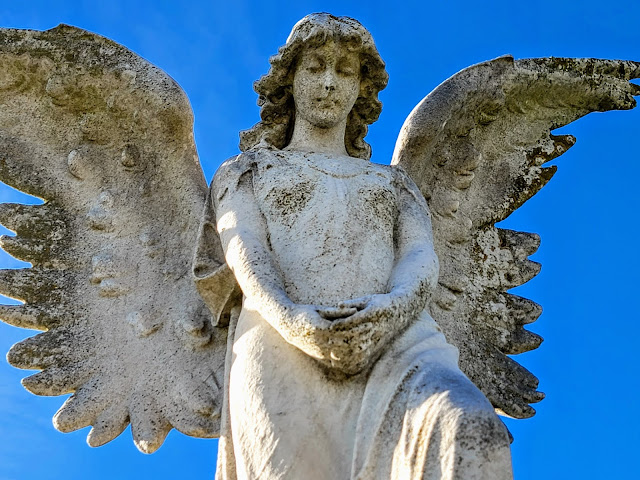 Although both Loudon Park and Greenmount Cemetery are larger and have a lot more monuments, no exploration of Baltimore’s famous dead is complete without a visit to the beautiful New Cathedral Cemetery. 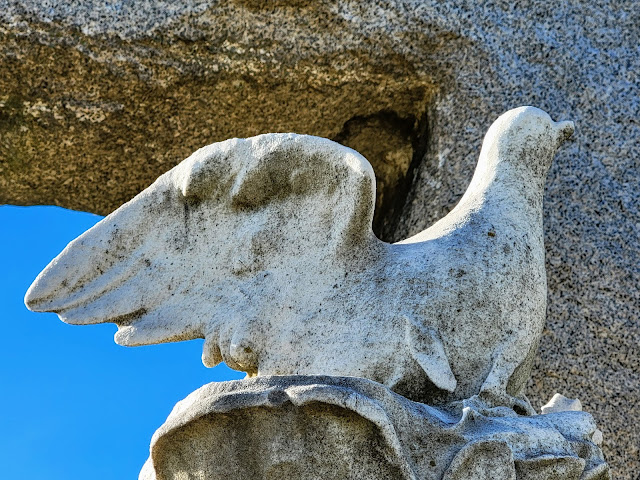 Getting there: 4300 Frederick Avenue, Baltimore MD 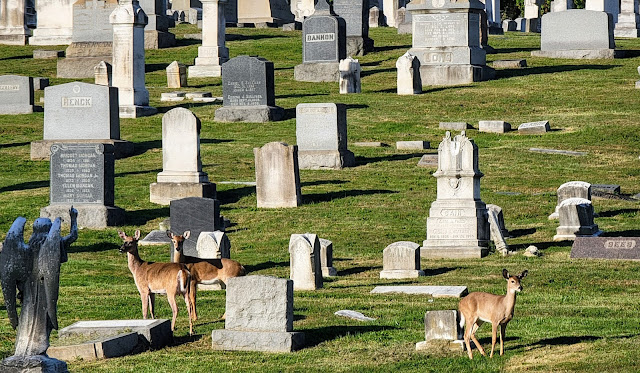 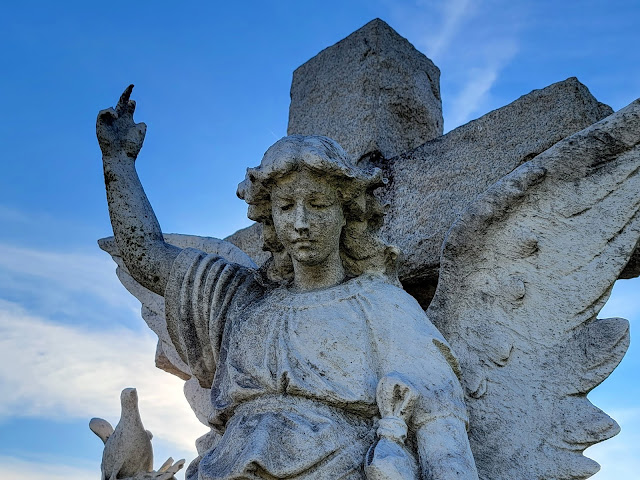 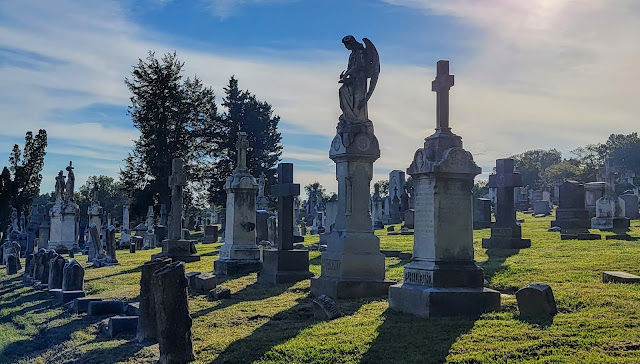