Grounds for Sculpture (GFS) is an outdoor art museum in Hamilton NJ, where you can walk around the beautifully landscaped grounds and experience the art from all angles. 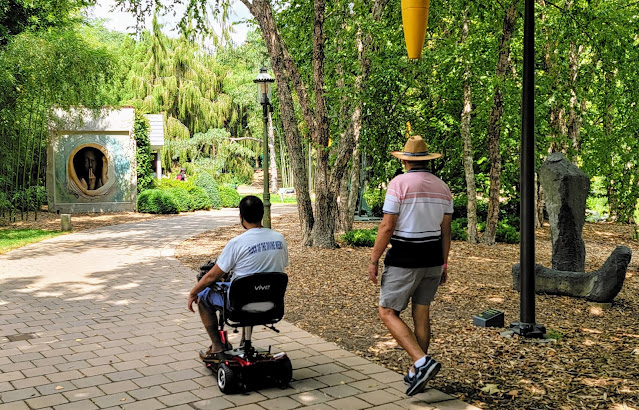 During a visit to GFS, you can stroll among the more than 500 works, nearly 300 of which are exhibited on the grounds year round.

From more traditional monuments and sculptures to the most abstract, the GFS art collection offers a range of styles and materials, created by both local and international artists.
Seward Johnson founded GFS in 1992, purchasing the former New Jersey state fairgrounds and repurposing several of the buildings onsite for the sculpture garden.
Many of the sculptures in the collection were created through partnerships that allowed artists to make exciting and ambitious new work. 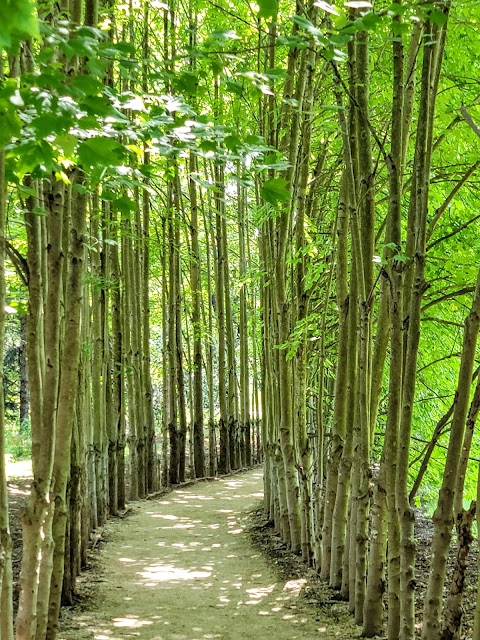 GFS continues to build its collection with a focus on acquiring works by established and emerging contemporary sculptors and provides opportunities for artistic growth through changing exhibitions, artist residencies, and educational programs. Although many of the works are permanent, almost half rotate in and out. 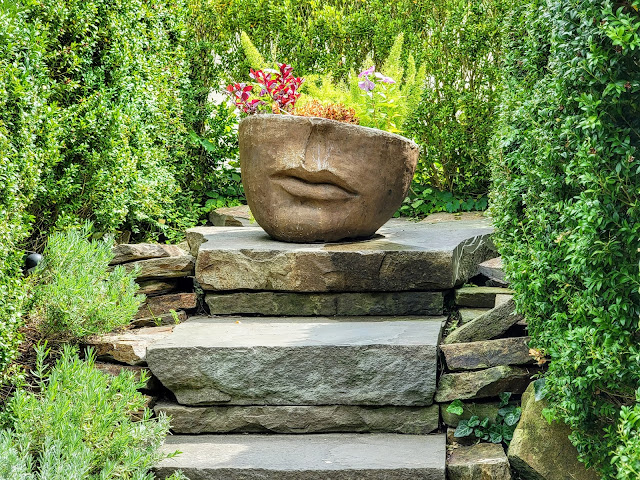 I particularly enjoy art outside. Tell me there’s a sculpture garden and I’m planning a daytrip to it — it’s a great way to make art more accessible to folks and kids, particularly folks like me, who enjoy art but don’t know a whole lot about it.
Some of the works were commissioned specifically for the GFS, such as Magdalena Abakanowicz’s “Space of Stone” and New Jersey artist Isaac Witkin’s “Garden State.”
At GFS, you can experience sculptural works and installations by American and international artists in wood, bronze, stone, stone, steel, paper, and assemblage since the museum’s inception in 1992.
If you’re hungry — or become so while at GFS, you have options. You can do as we did — bring your own picnic and enjoy it at any of the numerous tables or benches. Or you can enjoy a repast at Rat’s Restaurant, located right on the grounds. 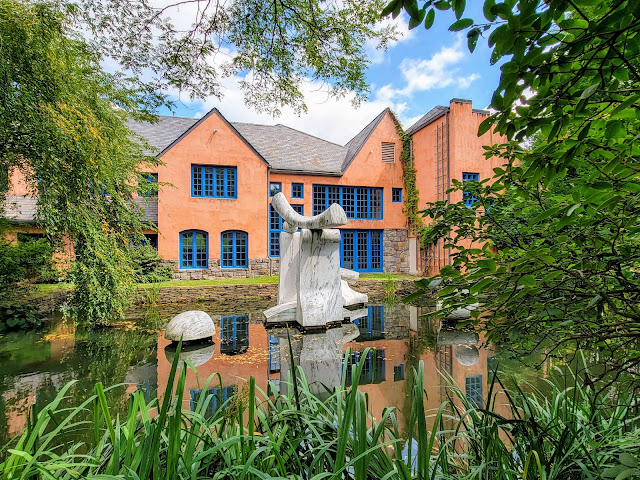 Rat’s Restaurant was designed by Johnson with an Impressionist Claude Monet-styled atmosphere. As you stroll by, for a few moments in time, you are in that Impressionist painting. 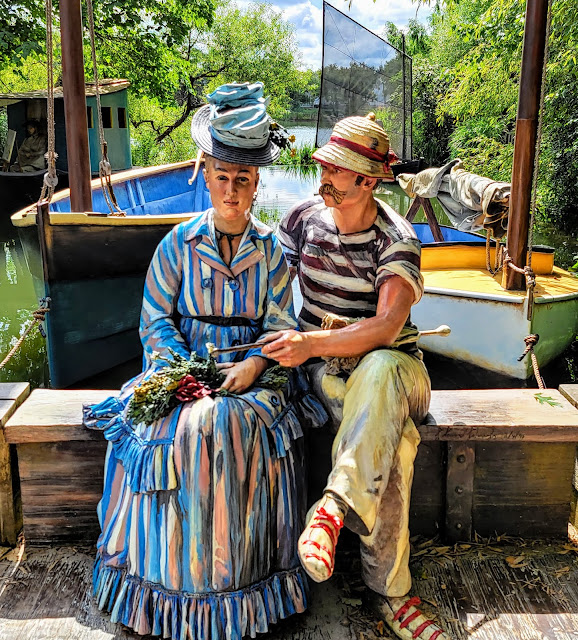 The scenery surrounding the restaurant features Johnson’s own impressionist-inspired sculptures, including a bridge over a lily pond which is an homage to Monet’s painting “Water Lilies and Japanese Bridge.” 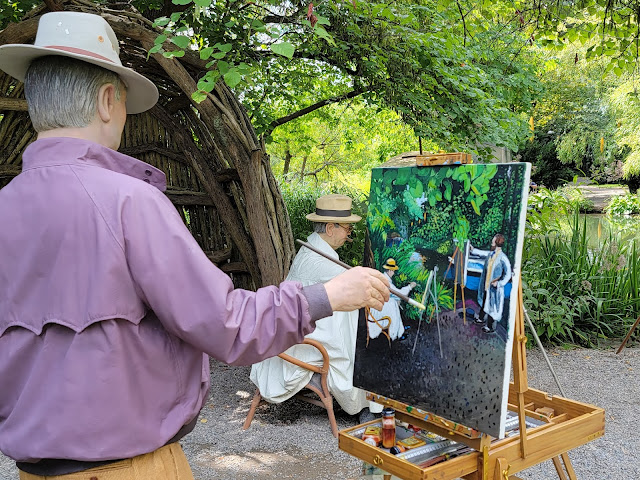 I was particularly struck by several of Taiwanese sculptor Kang Muxiang’s Rebirth series sculptures — and I was just in time to see them, as the exhibit ended the week (if I’m understanding the website properly) of our visit.

Kang’s themes of adaptive reuse and reimagination — the material used in his sculptures is elevator cabling from Taipai 101, one of the world’s tallest buildings — is relevant for our world today.

Of course, GFS is dominated by the works of Seward Johnson.

Johnson’s sculptures were some of my favorite pieces — it was because of him that GFS even exists. While I enjoyed the works that were inspired by Impressionist paintings, I was in awe of his “Daydream” (at the top of this article) and “The Awakening.” 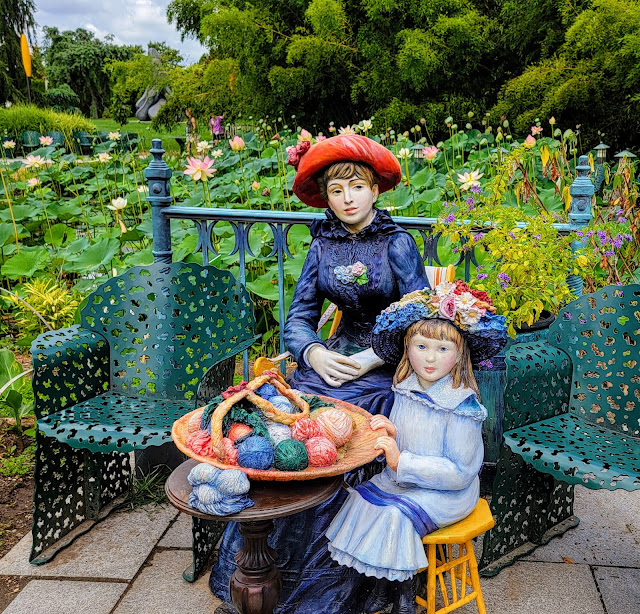 I realized belatedly that I’d seen one of his sculptures, “Unconditional Surrender,” of an American sailor kissing a nurse spontaneously on the street after WWII ended, in Bastogne, Belgium, when my spouse and I had visited. Unlike “Unconditional Surrender,” the sculptures on display at GFS are less controversial (the sculpture has been criticized because it seems to celebrate assault).
As you wander through the sculpture park, you randomly encounter Johnson’s sculptures — they are hidden around the grounds. At one point, I even took a photo of a man with a child on his shoulders and a woman pointing at a sculpture, before I realized that they were sculpture themselves. The joke was on me. 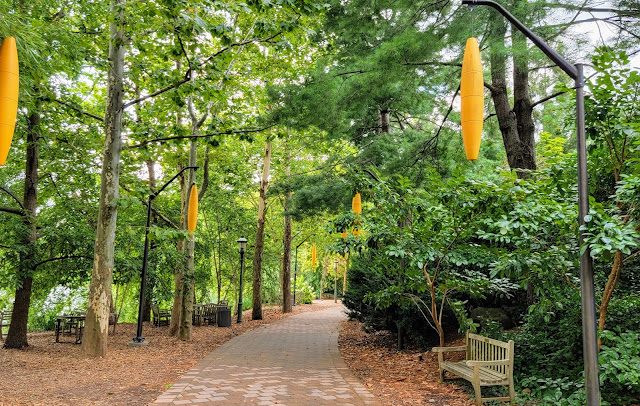 He has completed a series of over 30 works based on Impressionist and Post- Impressionist masterworks — and many of these can be found at GFS.
There are secret tunnels, inviting paths and mysterious hills to explore at GFS, and as you do, you will surely discover some interesting sculpture to delight you, or inspire you with awe.

Know before you go: download an interactive map at www.gfsmap.org. 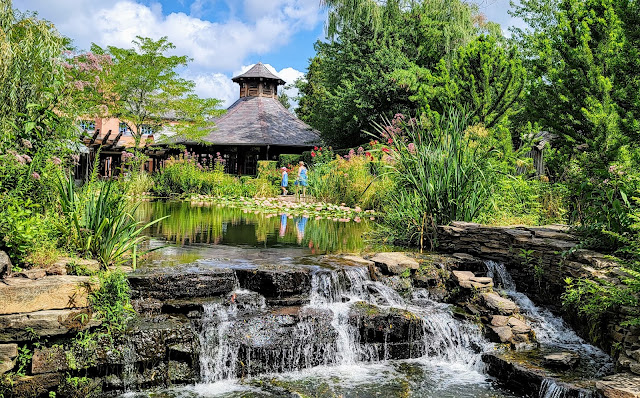 Hours: You can obtain timed entry passes at the website below.

Looking for other sculpture gardens? Be sure to check out Art Omi, in upstate New York; Annmarie Sculpture Garden in Solomons, MD; and the Baltimore Art Museum‘s Outdoor Sculpture Garden! 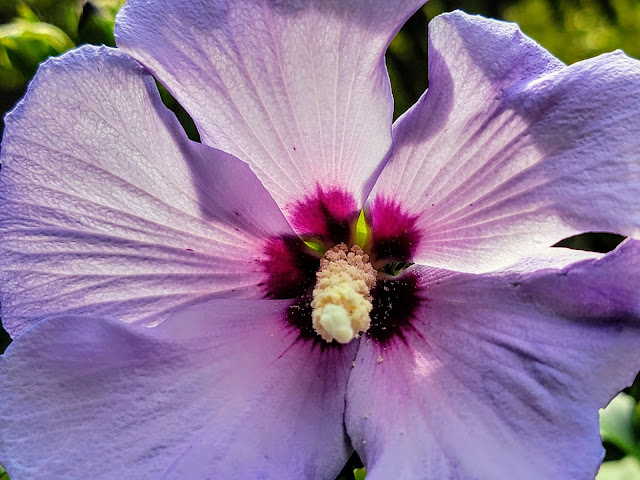 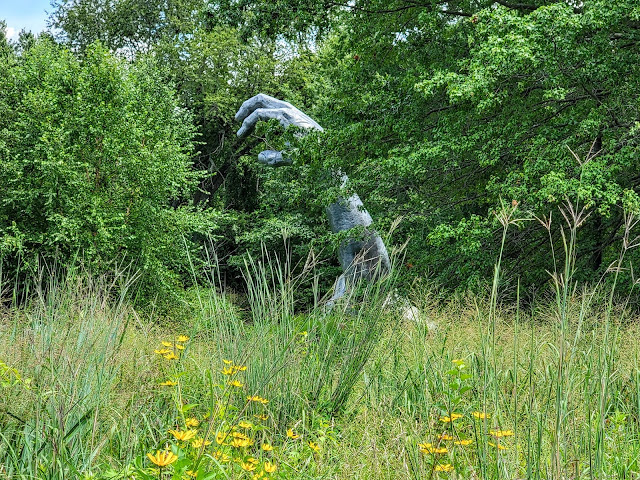