There are eight commercial caverns in Virginia, and each has unique formations inside and tours available. Each cavern has its own personality. Luray has the mostest — both in age and rock formations and other things to do right there. Grand Caverns has Civil War history that is cool and amazing, plus lots and lots of one particular unique formation. 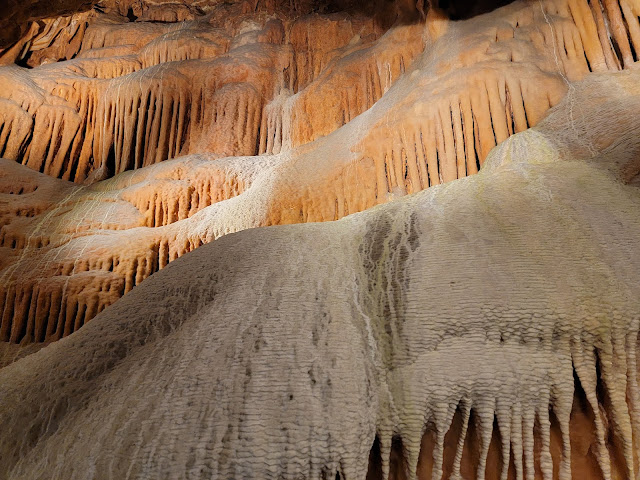 Virginia actually has more than 4,000+ caves, created by water dissolving limestone. Rainwater seeped down through the soil, becoming slightly acidic as it passed through decaying organic matter such as leaves. 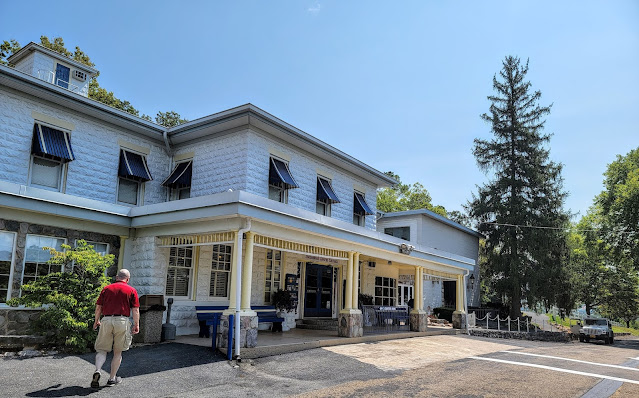 The caverns were formed millions of years ago by underground rivers and earth movements. Formations grew as water flowed through the soil above, picking up minerals and then depositing them on the ceilings, floors and walls of the open space. 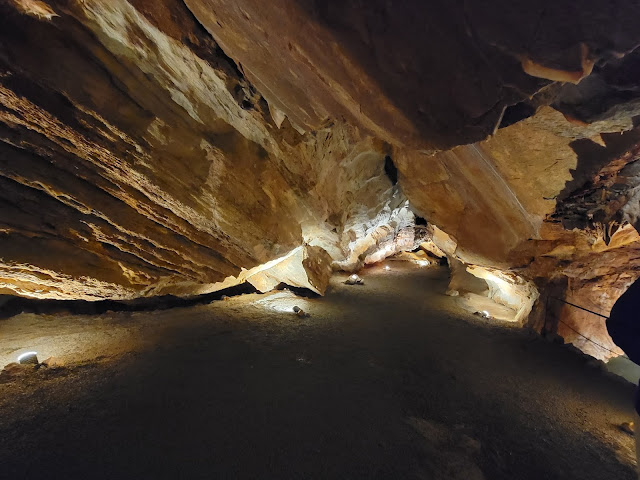 Different types of formations grow due to the speed of the water drips as well as the tilt of the rock it’s dripping from or onto. Some caverns are older than others — Luray seems to be among the older ones; Skyline Caverns a young whippersnapper in comparison. Shenandoah Caverns seems almost as old as Luray, but not quite. 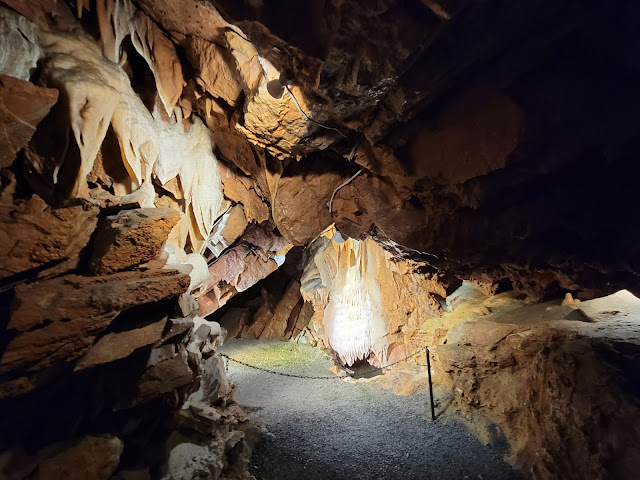 Shenandoah Caverns, to the west of Luray Caverns by 11 miles and just over Massanutten Mountain, offers guided tours (which really do bring the cave alive), a rare shield formation (which can be found in abundance in Grand Caverns, but almost no where else) and colored lights.

I mean, who doesn’t like colored lights in caves? 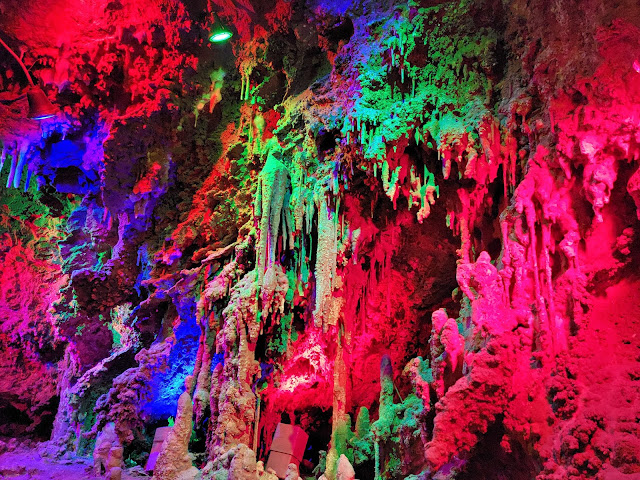 Caverns tours are approximately one hour long and although the tour guides offer up just about every rock pun available, it’s an enjoyable and engaging tour, interspersed with a lively and adaptive humor (at least by our tour guide, “Megan” or “Amanda” or “Rachel” (I really can’t remember). 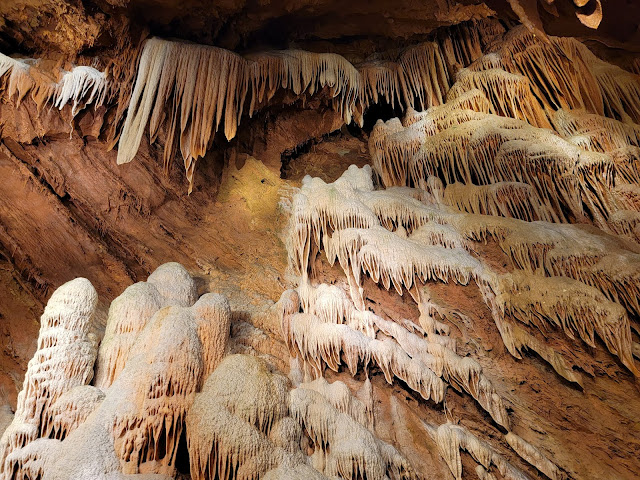 Due to it being a cavern, i.e., underground (the deepest point is 220 feet below the surface) the temperature is a constant 54-56 degrees year-round, so a light jacket or long sleeves are needed.
The tour covers 1 mile and 17 “rooms” within the cavern, during which you’ll get to see formations named Capitol Dome, Rainbow Lake and Beyond the Veil. 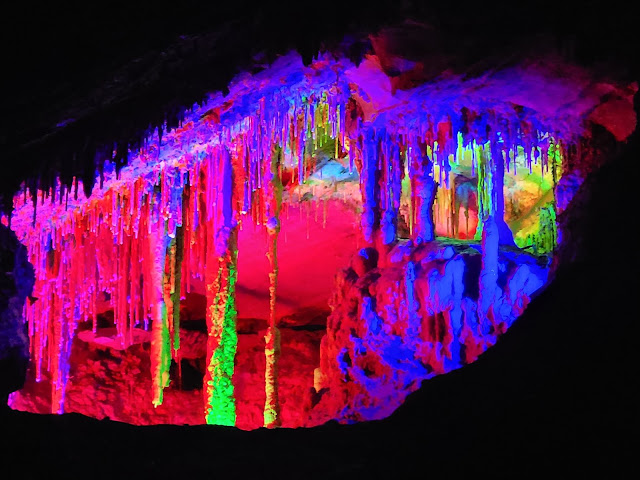 We were there on a summer day that reached almost 100 degrees, so experiencing 54 degrees for an hour was delightful. I kind of wanted to drag a sleeping bag, pillow and my book down below and set up shop there for the rest of the week. 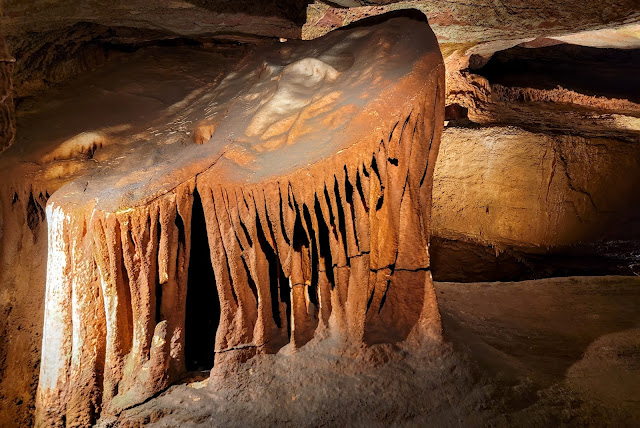 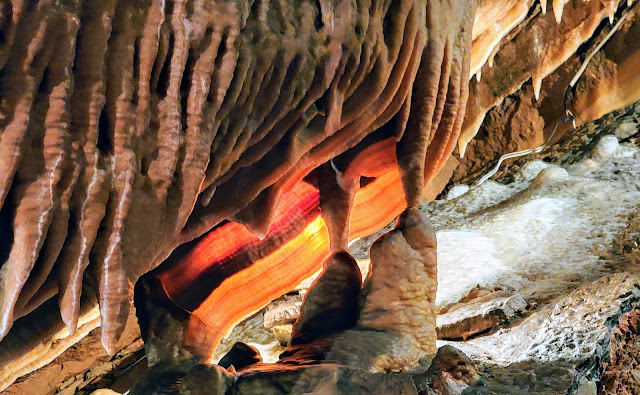 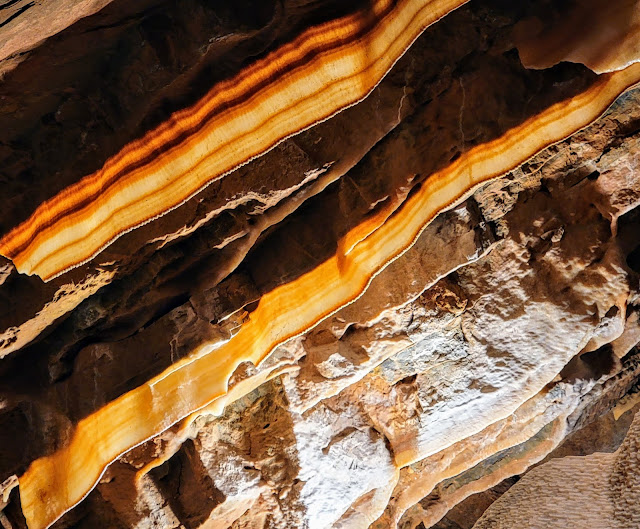 This cavern is the only Virginia cavern with elevator service, making it one of the easiest caverns to tour; that said, it’s not ADA accessible — the pathways are gravel and there are a few stairs (if I recall accurately) to navigate as well as some very narrow passageways. The tour covers one mile on a crushed gravel pathway with inclines and declines. 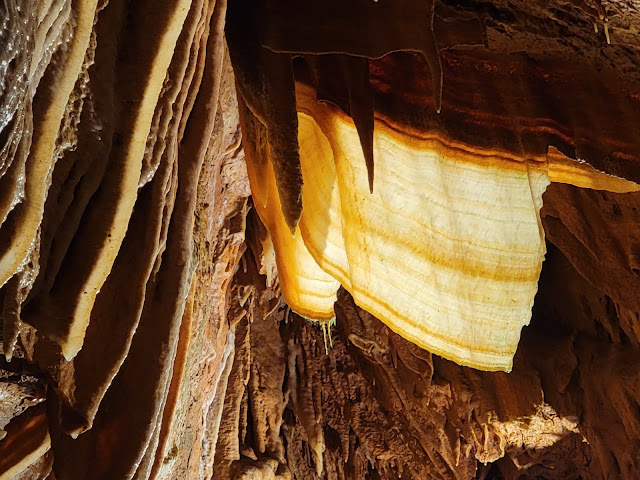 Shenandoah Caverns also doesn’t have the crowds that Luray Caverns draw, making it a bit more family friendly and easy to enjoy. 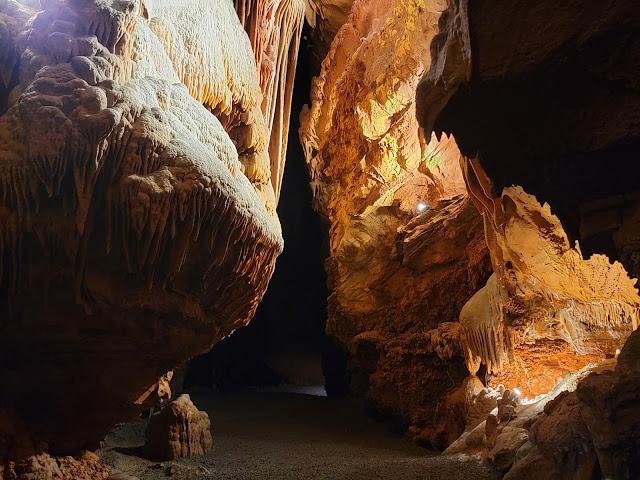 The caverns were first discovered in 1884 by two sons of a farmer, but didn’t open until 1922, when Hunter Chapman, having purchased the property from the farmer, opened Shenandoah Caverns, with a full-service hotel on the second and third floors (which later burned during a remodeling project). 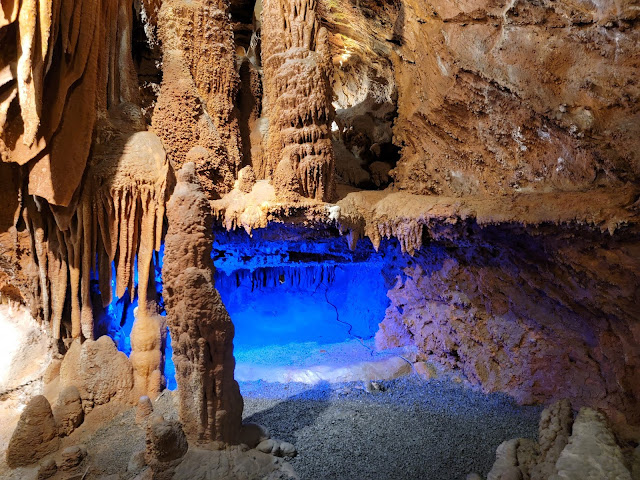 Know before you go: Be sure to wear a jacket or sweater and, if you tend to get cold easily, you might want to wear some long pants, even in summer. While there isn’t as much water dripping down in these caverns (known as “cave kisses”), you might want to wear a hat too. Finally, having non-slip shoes on are helpful as you navigate the sometimes slippery pathways. There’s also a small sandwich shop on site where you can get hamburgers, hotdogs, drinks and such.

Getting there: 261 Caverns Rd, Quicksburg, VA

Looking for other daytrip ideas in the Shenandoah Valley? Check out: